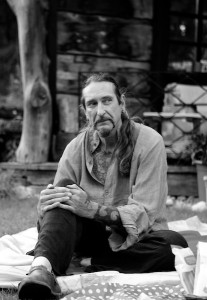 The artist Steven Vincent Mitchell (SV Mitchell) was born in Bristol, England,  He spent his childhood growing up in the South West of England, and then moved to Lithuania, where he lives so far.

In 1992, a drinking binge ended in a hospitalisation and a near-death “bardo” experience, in which the artist was graced with a moment of clarity into his condition. This experience was the catalyst that changed his life, and he started to express the art that we see today.

His career started in the world of tattoos, and later continued expressing through the painting and sculpture. He is influenced by the unseen and mystical, his genre is the shadow nature of life.

1999 to 2007 Steven Vincent Mitchell took regular sabbatical, Visiting USA, Canada, Nepal and India.
He spent time with the indigenous peoples of these lands, and in India he stayed with the Tibetan refugees.
He had the privilege of being embraced by these peoples, whose traditions, craft skills and mystical healing arts, were incorporated into his art.

At the beginning of his career, he preferred to exhibit in places like a mortuary chapel rather than in a traditional white wall gallery.
Those first exhibitions grew and evolved into his Bardo installations.
The exhibitions in Bardo and in the M. K. Čiurlionis National Art Museum graced him with international recognition.

2014 inaugurates his Bardo Museum in Kernavé, categorized by UNESCO as World Heritage.
The environment of the Bardo Museum offers a unique and personal insight into the visionary world of the artist and mystic,
with a continuous installation / exhibition of his paintings and sculptures.